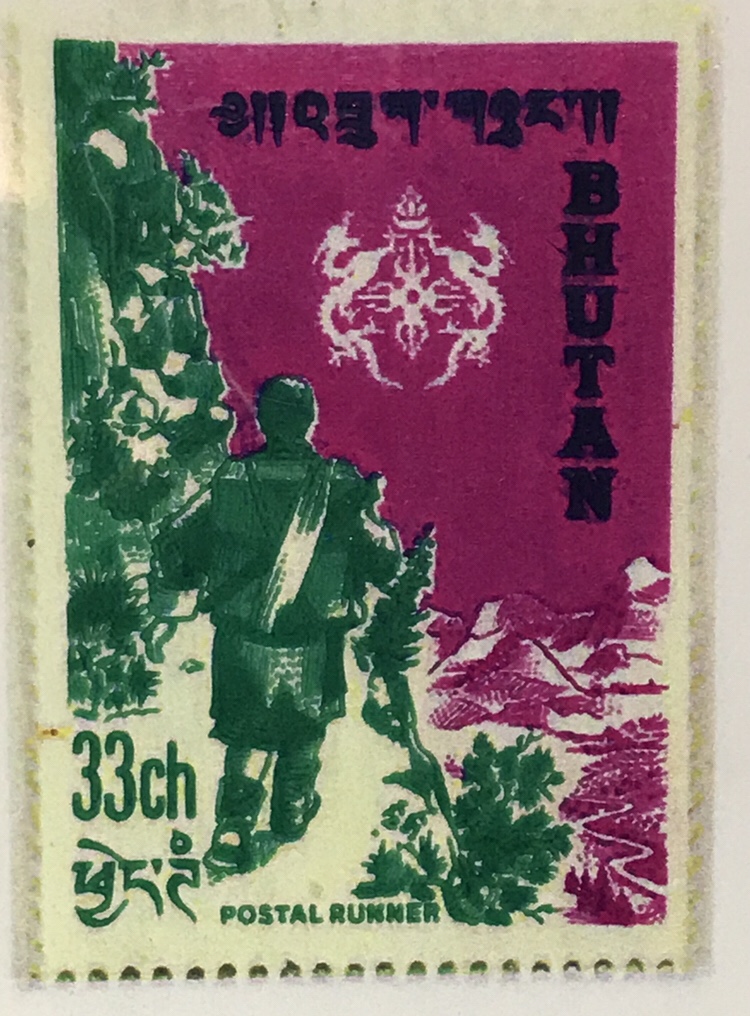 What causes a middle aged plodder to toe the line of a Himalayan half marathon wearing what is functionally a shorty kimono? A misplaced sense of adventure and a chance encounter with a postage stamp.

I Discover An Unlikely Tourist Destination

The national postal museum of Bhutan might not be the top tourist destination in this tucked away Himalayan kingdom. However, after a few weeks in the capital last year, I found myself wandering along display cases laying out the history of the Bhutanese postal service. Not surprisingly (in a land that waited until 1999 to receive television signals) the Bhutanese postal service got a late start, in 1962. Prior to the modern era, important official letters were hand carried throughout the kingdom by runners known as “garps”. Traveling by foot, these runners were exposed to high altitudes, leopard attack, and banditry. Due to his superhuman speed and endurance, the most famous of these runners was Garp Lungi Khorlo (Wheel of the Wind).

I only needed to read the name once to be inspired. Wheel of the Wind! Suddenly I wanted to glide down an alpine path, feet dancing among the stones. I wanted to float through a forest of blue pine, softly padding a carpet of needles. I wanted to run across a high pass in the diamond light of the Himalaya.

No matter my fitness app once categorized an “easy” 8 mile trail run above the capital as an hour and forty minutes of sprint repeats. That “easy” run had 1800 feet of elevation gain. There are no flat bits to this country, but no matter! I was inspired. I was infused with the spirit of the Wheel of the Wind! I was going to run a race in Bhutan, and I was going to do it wearing a Gho, just like those postal runners of old.

It turns out, I am unable to put on a Gho with out an assistant (my very patient wife). There are confusing pleats, one big hike-up, tucking, and then a cinching-wrap. It takes the two of us and an ample amount of cursing to get me into national dress.

Lined Up In My Gho

So, on March 3rd, when I lined up at the start of the 5th Bhutan International Marathon/Half Marathon, it wasn’t the altitude or the distance that had me worried. I was preoccupied with the image of coming unwrapped at mile 6.

The course meandered along the Mo Chu river through bucolic Punakha Valley. Villages, terraced fields, hilltop temples, and a 300 foot suspension bridge, the run overflowed with scenery before depositing finishers at a centuries old fortress-monastery.

I doubt my performance will earn me a running nick name as cool as Wheel of the Wind. I did not glide. I did not float. I did not summit. I plodded. But I also smiled, because when you’re the only foreigner wearing a Gho, every Bhutanese becomes your cheerleader.