Osho once said that the present is not part of time. Unlike the past or the future it has no duration. How long is the present? How many minutes, how many breaths? When we first arrived in Bhutan our present moments stretched out to the horizon and threatened to trample us in an never ending march of cold breathless misery. But now that we’ve boarded our flight to Singapore it’s different. The past two months feel like a runaway cart on a steep hill, each present moment coming in quicker and quicker succession, speed and momentum building until our Bhutan-life is a time lapse memory. Like watching video of a flower blooming in 10 seconds. Happiness does that, it shortens the present. 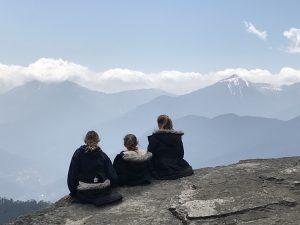 Two months is long enough to settle into a place, and for that place to settle into you. Isabelle has adopted the affirmative head wobble so common in South Asia. All three children have stopped playing store, and now play immigration (complete with pretend work permits and route documents).

But is two months long enough to cause long-term change? For our efforts in Bhutan to take root and continue without us?

Last week we were interviewed by the Bhutan Broadcasting Service for a piece on the culture of volunteerism. I tried to make the point that volunteering is a two-way street. That I am sure we’ve gained more than we’ve given.

Living and working in Bhutan strips away a lot of life’s clutter. Real priorities become glaringly apparent, as things you thought so important fall aside. Life starts to feel lighter, less serious, but richer. Family walks become the day’s most important event.

Our Bhutan experience has forced our family to overcome adversity together (often in the form of nausea and diarrhea). We’ve become a stronger team.

I just hope that two months is long enough for the change I see in my family to be permanent.