Throughout Asia there is little regard for classifying certain food as a “breakfast food”. Food is food, it’s eaten anytime. Grilled fish to start your day in Japan, curry in Thailand, fried noodles in Indonesia; dim  sum, baozi, jok. There are no rules, except one, it’s not a meal unless rice is served. Three times a day rice. Fried, red, sticky, puffed or porridge, steamed in bamboo, eaten with fingers, chopsticks or spoons, off plates or banana leaves. Rice, rice, rice.

Having been forced to endure its endless permutations, the kids are absolutely sick of rice. I’m sure I overheard them whispering in the dark about a rice revolt.

So we were surprised at how eager they were to help harvest some on our recent farmstay. Jen and I chose to ignore the muttered “die rice, die” that accompanied the swing of their sickles. 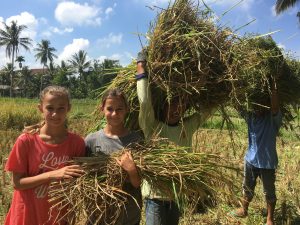 Outside the small village of Tetebatu, on the southern slope of an 11,000 foot volcano, we five shared a mosquito net and a thatched hut.

It sounds awful, it was anything but. The interior of Lombok is a different world from the touristed beaches that ring the island. In the rice paddies we traded the sounds of whining mopeds and incessant street  vendors for geckos and tree frogs. Pet homing pigeons with whistles around their necks were released each evening adding to the gentle soundscape of the village. The only constant to remind us we were on the same island, the call to prayer. Card games, star gazing, chicken chasing, the slow rhythm of the village was a nice reminder that boredom is actually a luxury. 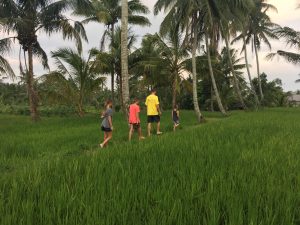