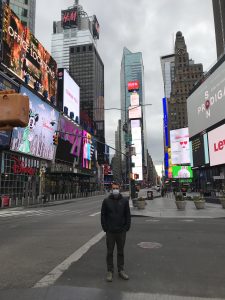 My time in NYC is proving to be a lonely, challenging experience. Jen has encouraged me to journal about it. “Brain dumping” she calls it. I secretly think she means “onboarding your therapist”.

I didn’t expect the physical challenge to be so great. Twelve hours sweating in a bunny suit. It is a chore to take them on and off, and each time you risk another exposure event. So I try to hydrate before my shift. Not too much mind you, I don’t plan on peeing for the next six hours. My goal is to make it to one a.m. The halfway mark. After that first six hours, I justify the hassle and risk of doffing all my gear and finding one of the respite rooms. Occasionally there are donated trays of pasta, pizzas, Cliff bars. There are always cases of water in the 7th floor room. I usually head there, to chug water, and sit down for the first time that shift. Halfway and I’m already wondering if my back and legs can withstand another six hours. 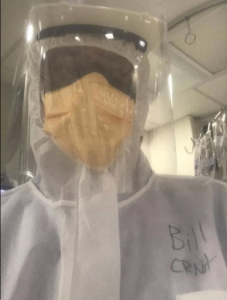 Everyone has their own PPE system. With so much donated gear, there is no standardization. You find what works for you, what you can rationalize as safe. Some providers are more lax with their gear than others. Some only don an N95 and a paper-thin yellow gown. Maybe it’s overconfidence, maybe it’s fatigue. Others wear full suits, rubber gumboots, and full face respirators. The wide variations give it all a sense of personal ritual. Like war paint, totemic charms, and found bits of armor. More a band of viking raiders, than a professional standing army.

And I’ve developed my own ritual. A system of layering I hope will protect me for this month.

It starts with the bunny suit. I try and always hunt down the style with a hood attached. Beyond the head covering, the material of this style is less permeable. It reminds me of Tyvek house wrap, and breaths about as well. In the beginning, I had to hunt three floors and as many nursing offices for one of these. As such, I’ll try and reuse it for 4 shifts. Once on the unit, I’ll wrap my ankles in tape so I’m not tripping on the footy bits all night.

On my hands, I’ll put on sterile surgical gloves as a base layer. These are less permeable than the exam gloves that are all over the unit, and they come up my forearm past my wrists (my wrists were exposed quite a bit my first shift before I found a stash of these gloves). I’ll wear this base layer glove continuously, sweating, and turning my hands pruney throughout the night. One modification will be ripping off the index finger on my right hand. I’ll need that fingerprint a hundred times to access the locked medication cabinet. Throughout the night, I’ll purell and wash my hands in these gloves as if they’re my own skin. Ontop these gloves I’ll wear a pair of exam gloves that will be changed between patients to prevent cross-contamination.

Next, a lunch lady bouffant hat before I don my N95. The duck-bill version is the most available here. I know I have a good fit because my nose immediately feels pushed down onto my lip. Next comes a regular surgical mask on top of the N95. That’s the throw away mask. The N95 being too precious. It’s key to find a tying surgical mask and not one that loops over the ears. Two hours in with the loops and it feels like your ears are being sliced off your head with dental floss. Goggles before the hood of the bunny suit go up. Cap the whole thing off with a face shield and I’m already feeling the urge to itch my nose.

By the end of the shift, my hands will be prunes, and the urge to rub my face and nose will be unbearable. I’ll have a headache from the strap on the face shield. Taking the gear off comes with its own ritual. I rub myself down with bleach wipes then try and reverse the donning procedure. If it were normal times, all would come off inside out and go straight to the trash. But these aren’t normal times, I carefully extricate myself from the suit trying not to touch the “outside” of it. It joins others of its kind on IV poles near the front of the unit. Coat check for a bunch of infectious Olaf costumes.

The scrubs I wear to and from work, are different from those I wear on the COVID unit. Even so, back at the hotel, I strip down to my underwear in the hallway before entering my room. No one bats an eye. The only guests here are emergency medical workers. Immediately inside my room is my “dirty station”. Here I wipe down my phone, my badge, put my scrubs into a bag and go straight to the shower.

Finally being able to rub my nose and face is bliss.

That’s when I’ll try and rub out all the mask lines on my face, and cry out all my tears, before I FaceTime Jen and the kids.

After the shower, I put on my Hanuman t-shirt.

The monkey god feels appropriate here. Devotee of Rama, avatar of Shiva. Hanuman is the killer of pride and the lord of celibacy. Celebrated for his faithfulness, he once mistook the sun for fruit and bit into it, forever altering his face and that of all simians. After a month in an N95, I will not be surprised to have an altered face as well.

Having a mascot for celibacy is just a comical bonus here.

In Hinduism Hanuman is the ultimate servant, a god that wipes out ego and pride.

Some of the CRNAs here balk at taking ICU patients, at performing nursing tasks that are beneath our advanced level of training. But that is where the needs are. Regularly ICU nurses only are assigned one to two patients. Saturday morning I gave a report to a nurse assigned 6. That same nurse had 9 patients the week before (all on ventilators and receiving blood pressure support with multiple IV medicines that need constant titration and attention).

I am proud of the CRNAs who are pitching in at the bedside, I would give them all my t-shirt. They’ve put their ego aside, and are serving where dire need and their unique skill set intersect.

And the need is indeed dire. This chaos is not something I ever imagined seeing in a hospital here in the industrial west.

There is a scene in Apocalypse Now where Martin Sheen is crawling through a foxhole trying to find the commanding officer of an army unit about to be overrun by Viet Cong. In the scene, he asks a soldier where their commanding officer is, and the soldier responds “Man, I thought you were the C.O.”

That’s the feeling here. The units are staffed with people from all over. No one has had an orientation. Many lack computer access, medication access, or even scrub access. Often you’re working at the bedside within four hours of arriving at the hospital.

Ad hoc engineering for ad hoc ICUs. Pre-op, PACU, Cath Lab. All are ICUs now. None were ever designed for such a role, and none can achieve that role 100%. Something is always missing, not connected, not plumbed,

Every unit is full of ventilator-dependent patients. Twenty or so per unit, sedated, and on hemodynamic support. The peak pressure it takes to drive breaths into them is easily twice that of normal surgical patient. We place them face down on the beds, “proning” them for 16 hours straight in an effort to use the larger surface area of the posterior lung to oxygenate them. Scant coffee colored urine in the collection bags is a late sign that their kidneys are shutting down. Any dependent body part swells as fluid leaches into their tissues. Because of the proning, their eyes look like a prizefighter.

If they start to die, we flip them on their backs and start the standard code algorithm minus chest compressions and bagging. That could aerosolize the virus and create a greater risk for us all. We call this style a slow code or a chemical code. No one expects it to work. We tell ourselves it’s good practice for the residents.

We try and facetime the family. Sometimes it works. I can’t imagine how heartbreaking that is. Strangers in space suits showing you a shaking video of your wife’s last moments.

There are five refrigerated semi-trailers outside the E.R. Four are already full of the deceased.