We’ve been doing this sort of thing for decades, Jen and I. We’ve negotiated transport and driver countless times. You think by now we would have learned to ask if the road is paved the entire way. I guess we’re slow learners.

This weekend’s excursion was to Rwanda’s western border with the Democratic Republic of the Congo. Unlike the flat savannahs of the east, western Rwanda is mountainous. So our five hour, partially-paved trip was overflowing with twists, switchbacks, and hairpin turns. Stella beat her Bhutan record and threw up four times during the ride. What a trooper, she collects airsickness bags from all our flights, knowing that we’re likely going to force some nausea inducing adventure on her.

Not helping matters was our driver’s aggressive acceleration-braking, characteristic of those who drive with two feet. Perhaps a technique for our zealous driver to more effectively overtake and pass every bicycle, car, minibus, and lorry that had the affrontery to occupy the road ahead of us. Through a complex semaphore of horn-honking and turn-signal flashing, he would communicate to the other motorists his desire to pass at the next convenient blind curve. Fatalistic drivers like this one always earn me a seat as shotgun. Jen knows that my life insurance has the higher payout. So instead of watching our driver attempt to squeeze three abreast, between an endless succession of buses and oncoming dump trucks, I focused out the side window, at the passing mountains of western Rwanda. 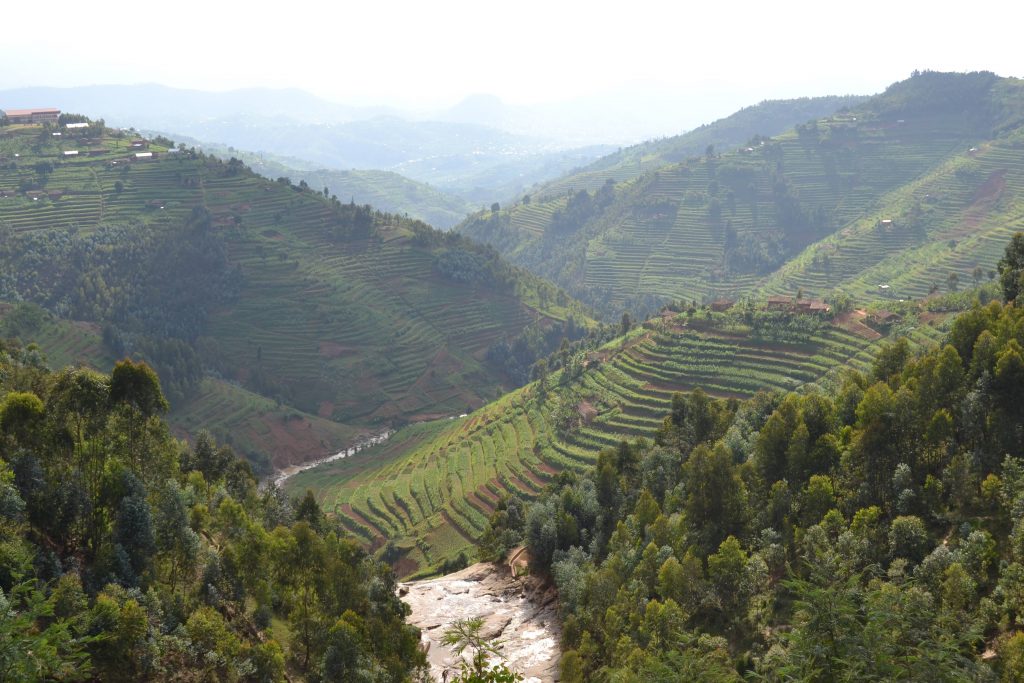 Around 5000 feet, the topography of western Rwanda reminds me a lot of Appalachia. However, being situated on the equator the curvature of these hills are clothed in a very different flora. In place of the mixed temperate forests of NC or VA, these mountains play host to a more tropical variety. Immediately outside of the capital, the land is parceled in an endless quiltwork of gardens, and small subsistence farms. Broad leaved-banana trees surround homes and run up to plots of corn, peas, sweet potato, melons, cassava. There are stands of bamboo, avocado trees, passion fruit vines. The valley floors are all sectioned into rectangled rice paddies. If any naked earth shows it is the red dirt of my childhood in GA. Shades of green and red are the dominant palate of these hills.

After a while I notice something missing. I’ve not seen any draft animals in Rwanda. There are no oxen tilling those paddies, no donkeys pulling carts of produce. I guess it makes sense. Rwanda is Africa’s most densely populated country. Labor here is cheap. We’re constantly passing bicycles laden down with small mountains of plantains, sweating men and boys pushing them to market.

As we get closer to our destination, the patchwork of gardens gives way to industrial-scale tea plantations. The waist high shrubs are so tightly packed, they make entire hillsides into bright green topiary. The only break, the occasional blue-grey stand of eucalyptus, identifiable by its scent as much as its silvery leaves. The plantations are community co-ops. In addition to a source of local income, these fields form natural barriers around Nyungwe Forest National Park.

Nyungwe is Rwanda’s most important area of biodiversity. 1000 plant species, 13 species of primates including chimpanzee and colobus monkeys, 275 species of birds, 120 different types of butterfly. When we cross into the park we enter a world of nature left to its own business. Now the hills are obscured by curtains of green wild rainforest jungle. Blue monkeys eye us from the roadside and hornbills glide along the valleys. There is so much green it makes a racket for the eyes.

Rwandan soldiers also watch us from the roadside. In body armor, with an impressive array of machine guns, they are a reminder that we are on the border of the DRC. From our hotel room, we can look across Lake Kivu and into that no man’s land of civil war and Ebola. It’s like looking into North Korea, Syria, South Sudan, Yemen. Like standing at the edge of the grand canyon or the top of the Sears tower. It gives you the willies. Some travelers (with a poor sense of self-preservation) actually cross that border tracking gorilla, looking for adventure, hits of adrenalin.

For Byers Without Borders, the hotel buffet was adventure enough. Lily and I spent the majority of Monday prostrate on the cool tile floor of our bathroom in Kigali.

As many of you know we left the comforts of home to travel to the other side of the world to do volunteer work with the organization Health Volunteers Overseas  in the country of Bhutan. My wonderfully talented husband, Bill, has been writing (his true passion) about our adventures and experiences on our blog Byers Without Borders (you can follow us there too) and I thought I would add a few tips and tricks here and there as well.

How do you spend 27 hours on a plane with 3 kids and not lose your mind?

#1 Bring along an empty spill-proof water bottle. Those little clear plastic cups you get are inevitably going to get spilled either all over your kid, their sibling, another passenger or all over you.

#2 Foldable Headphones. Earbuds never seem to fit little ears. Plus there is a lot of white noise from the plane. Most planes, especially overseas flight, have in flight entertainment built into the seat that you can plug your headphones into but their also helpful when playing games on the iPad.

#4 Change of Clothes.  This is a no-brainer for kids 6 and under but when flying with bigger kids 6-10 like mine, it’s a good idea for you to have a change of clothes.  Last year we were on our flight from Seoul, Korea to Thailand , we had already been traveling for nearly 20 hours at this point so I was asleep when Isabelle shook me awake to then vomit all over me.  Or a new friend , another HVO volunteer shared with us recently his 5 year old vomited all over him soaking his jeans all the way through.  He abandoned them in the bathroom garbage and then wrapped himself in an airplane blanket for the remainder of the flight until reaching the next airport to then purchase the most expensive pair of sweatpants ever at an airport boutique.  Pack your extra pair of clothes in this awesome carry on back pack.

#5  Have a Sense of Humor.  It’s important during these long flights that you find things that make you laugh.

Here is a list of some great things to bring along.